The Most Famous Painting in the World 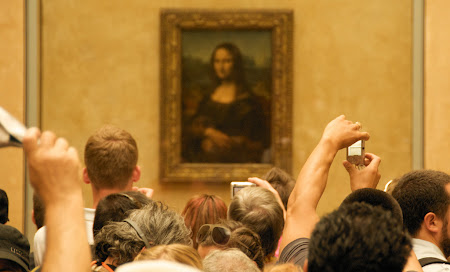 When I visited Paris for the very first time some years ago, the number one list in my destination is of course, The Louvre. This is one of the most fulfilling things I have ever done in my life. I was always hesitant to go sight-seeing or even visit museums because I had this guilty feeling of doing something mundane. I thought that looking at paintings were a waste of time. At least that was what I felt when I go to local art exhibits.

But for the very first time in my life, I was in awe with many of the paintings I saw in The Louvre. No wonder millions of people visit it every year. The tour guide told us that nearly 10 million people from all over the world come to The Louvre for the common purpose of seeing the most famous painting in our life time. I asked what that painting was. And the answer was: Mona Lisa.
Posted by Beverly at 4:36 AM No comments:

The Colors of Dusk 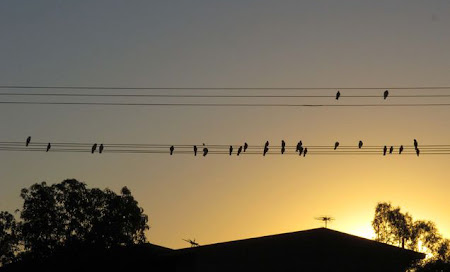 Has anyone ever wondered why birds make all the noises in the afternoon just before sunset? I was always observing this behavior from the birds that flock around my neighborhood and I was really fascinated with all the sounds they make. One thing I always wondered was the way they make more noises at dusk. They flock in clusters and sing to each other. But as I observed their merriment, I was also quite fascinated with the color of the dusk that was quickly passing by.

Like an epiphany, it struck me. I think these birds were rejoicing at the fading colors of the day and the quick change of the skies from light to dark. It might also be their way of praising the beautiful scenery. I think they understand and appreciate the beauty of nature better than people do. I was just so happy at this thought of seemingly understanding a bird’s eye view.
Posted by Beverly at 4:26 AM No comments:

One sunny day, when I went to my hometown, I decided to take lunch outside. I take my mother with me to enjoy a new cuisine at the new restaurant in the city. The distance to the restaurant is not that far, so we walked there. After queuing for a while, the waitress got me and my mother a seat at the front, facing the street with a glass wall between us.

I ordered a chicken salad and my mother order a hamburger. We catch up on each other’s activity. I talk about my work and my mother talk about the family. And then, there is a familiar feeling like I have seen this kind of scene before. Mother and daughter having lunch at a local restaurant, then I smiled. I watch all the season of Gilmore Girls. I like the relationship between Rory and her mother. I have the same close relationship to with my mother. And I am glad that I have one more experience to treasure within my heart.
Posted by Beverly at 4:18 AM No comments:

Getting Out at the Wrong Floor

Email ThisBlogThis!Share to TwitterShare to FacebookShare to Pinterest
Category: Life in General

The Day I Got My Doll Prize from Time Zones

A decade ago, there is new entertainment zones called Time Zones opened in my city. The first week at the zones is really crowded. But of course, I decide to try out the new entertainment store. My brother and sister are already there trying out new game. The store itself is really wide and has about more than 20 games. Most of them are video games. I don’t like playing video games, so I decided to play something else instead. I notice the ball wheel game at the corner of the store. All you got to do is throw a ball through a six meters board. At the end of the board there are numbers with a hole below like one, two, three, five, plus one, minus one, etc that will make wheel spinning at the exact amount the ball got to one of the holes.

If I got the monkey to get at the top of the wheel three times in a row, than I hit the jackpot and can have a lot of coupons that can be substitute with a gift. I don’t have any experience before, but maybe Lady Luck stayed at my side, because of all the 20 times I tried, I got 15 of them hit the jackpot. And at the end I got myself an expensive doll to bring home. I became a spectacle because so many audiences watched me play. But the same thing didn’t happen the next day, so I guess it is a once in a lifetime experience thing.
Posted by Beverly at 4:14 AM No comments:

Email ThisBlogThis!Share to TwitterShare to FacebookShare to Pinterest
Category: Games

The Jealous Side of Me

Though I am proud of being who I am I cannot stop thinking what ifs about myself. Seeing my cousin’s photo that lives in the London since she was a little make me feel a little envy. 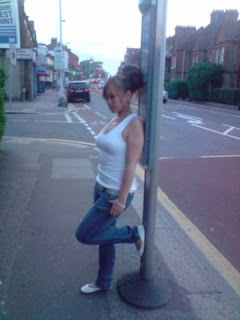 She have this, she have that. She looked like this, I am far not. I just kept comparing myself to her, and it’s me, who hurts deep inside at the end. I don’t hate her for what she have, nor I don’t hate my parents for not providing me the things I saw she encompass. I only want to feel the same way with her. She looked matured enough and handles things precisely, but still pretty. She got a job and killer dresses and shoes I want to try put on. Maybe it’s also because she grew up in a different environment. She acquired the influence her nation. Her life at the other side of the world seems a movie for me. - peers, jobs at the young age, and happiness. I adore my cousin so much. I‘m looking forward to have her used dress and shoes when she visits here in the Philippines again. And hear more of her stories.
Posted by Beverly at 11:52 AM No comments:

Email ThisBlogThis!Share to TwitterShare to FacebookShare to Pinterest
Category: Me and Myself
Newer Posts Older Posts Home
Subscribe to: Posts (Atom)