Playing DOTA is Not Bad All 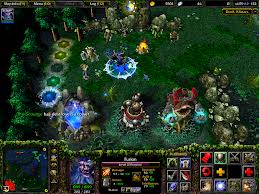 When I’m just hearing things about the computer game DOTA, my initial notion for this game is brutal, and money- wasted game, wrecking students’ education and non-sense. I ate all my words. I did truly not know what this game all about was.

I had an argument with a DOTA player and he then explained me that it was not just a killing-your-opponent game. This was meant to play with logic and analytically skills. I was shocked when he convinced me that this game needs a thorough mind in able to win the battle. He also included that there has been an international competition going for DOTA players. I was taught to play a game, I did understand how the game was played but cannot apply it during the actual game. I now belonged to the group of people who defends the players of the Defense of the Ancients. It was quite an addictive game, but it has no fault if the students flunk at their school, it is the students fault and is blamed because they can't control their self in playing computer games.
Posted by Beverly at 6:14 AM

Email ThisBlogThis!Share to TwitterShare to FacebookShare to Pinterest
Category: Games