Miley Cyrus is really Twerkin’ It 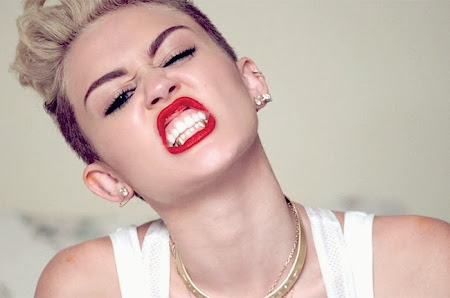 That stunt at the VMAs was really a publicity drive for Miley Cyrus. Within days, her singles became the most downloaded tracks on iTunes and she was the talk of the town for the later weeks. In fact, she still is. Only now it’s no longer just about that stunt at the VMAs.

She recently released a video where she was crying and performing naked. If you asked me, that “Wrecking Ball” video really speaks volume about Milely and the direction she wants her career to take. She simply blows through the stereotype. And this girl simply isn’t done yet. Just yesterday, I found out that she partnered with Wiz Khalifa to produce another song. Actually, that was a rap. It was a tribute to the greatest baller of all time, Michael Jordan. She really seems intent on strutting all that stuff that she’s got and putting it all out for the world to see.

I just hope Liam Hemsworth loves her enough to stick around for the spectacle.
Posted by Beverly at 3:53 PM