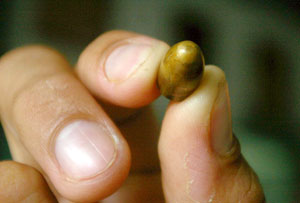 If she'd die tonight, the reason would be vague, but let the mourners mourn, that's why they're called mourners. They'll mourn for whatever reason they have in mind. Let the tears flow, be it of sorrow, or of joy, or of that of a crocodile feigning suffering for the loss. If she would even be considered as a loss, that is. Let the naysayers rant whatever they think is worth ranting about. Let them vent out and know afterwards that what caused them to be their lack of sleep. So let them sleep. Let no one play the role of an immobile soldier looking after the stiff corpse of a boxed girl, waiting for all the candles to melt away.

If there would even be a wake, that is. Let the comforters comfort the mourners, though it would be nonsense. Mourners mourn by decision. Comforters comfort for deception's sake. A mind trick. For they all know that no words or promise could calm the oppressed-by-choice heart, if there would even be a single heart, that is. Let those faraway creatures stay where they are and not spend a single cent. Just to peek in and see through the transparent barrier how she looks like now that she's lifeless. If she even experienced having a life, that is.
Posted by Beverly at 12:05 PM